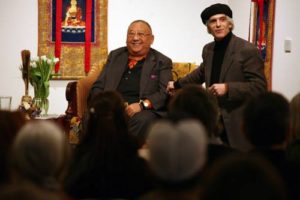 Early Wednesday morning, February 15th, 2017, the Tibetan community in exile and the international Buddhist community lost one of its leading lights—Kyabje Ngawang Gelek Demo Rimpoche—known to his many students around the world as Gelek Rimpoche, or simply Rimpoche, our precious gem. Besides His Holiness the Dalai Lama and Gelek’s peer, Trungpa Rimpoche, our jewel had few equals in his ability to be a living bridge between the spiritual-intellectual elite of Tibet’s Himalayan ivory towers and the increasingly global technology and pop culture of the modern West. While his preeminence among the vanishing breed of master scholars trained in the mountain kingdom alone would have merited a storied place in history, it was his unexpected role as a leading monk-exile turned lay Buddhist teacher that earned him global renown.

Nephew to the 13th Dalai Lama, and educated alongside the 14th, Gelek found himself at 21 attending an unusual prep school in Delhi with Trungpa, Lama Zopa, Chokyi Nyima and other “young lamas,” getting groomed by the first Western Tibetan nun Freda Bedi to understand and teach the new world he was thrust into. Our Rimpoche turned out to be not just a gifted student, but an avid connoisseur of Western culture. Soon enough, he found himself in New York City, sharing his light with the likes of Allen Ginsberg, Paul Simon, and Philip Glass.