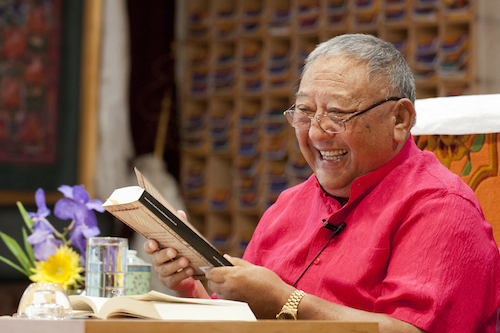 The influential Tibetan teacher and respected author Kyabje Gelek Rinpoche, a tulku in the Gelugpa school of Vajrayan Buddhism has died. A notice on his Facebook page advised that Gelek Rinpoche had passed away in the early hours of Wednesday morning.

Among the numerous touching tributes posted on the website of the Rinpoche’s non-profit organization Jewel Heart, were words of commemoration from Thupten Jinpa Langri, the principal English translator of His Holiness the Dalai Lama:

“I just learned about Gelek Rinpoche’s sad entry into nirvana. With him we have lost an important link to the great lineages of Tibet’s great masters, especially of the Geluk school. Known more famously for the Tibetans as Nyakre Khentrul Rinpoche, Rinpoche had been instrumental in reprinting many of the Geluk texts in the 1970s, and also remained an important object of affection for both Kyabje Ling Rinpoche and Kyabje Trijang Rinpoche. Of course, his emergence as one of the great Tibetan teachers in the West has also been a source of inspiration for many.”

“I received word of Rinpoche’s passing. Losing a lama is one of the most difficult experiences I’ve gone through, in part because it brings home just how remarkably fortunate I’ve been to meet a true Dharma teacher who can guide me. I’m always amazed that somehow little ol’ me created the cause for such fortune, And now my teacher gone.

“But our lamas are never gone. They reside in our hearts forever in the form of the teachings and guidance they’ve given us. We can turn to that at any time to help guide our thoughts, words, and actions. Plus our daily practice of guru yoga and reciting a glance meditation on the lamrim renews our contact with them every day. Our teachers taught us, they believed in our ability to practice the path and to become kinder and more compassionate people. And now that Rinpoche’s physical manifestation is no longer here, out of respect and love for him, we must step up and carry on his work of cultivating wisdom and compassion in our own hearts and in the world. All of you are like light beams radiating from Rinpoche’s heart, carrying the message of the Dharma into the world by how you live your life and how you continue sharing the Dharma with others.”

Born in Lhasa, Tibet, in 1939, Kyabje Nyagre Khentrul Ngawang Gelek Rinpoche was recognized at the age of four as the incarnation of Nyagre Khentrul Rinpoche of Drepung Monastic University, where he went on to study as one of the last generation of Tibetan lamas to be educated there before the Chinese invasion. As a nephew of the 13th Dalai Lama, Thubten Gyatso, Gelek Rinpoche was tutored by many of the same masters who taught the current Dalai Lama and he earned a Geshe Lharampa degree at the unusually young age of 20.

In 1959, Gelek fled from Tibet to India, where he become one of the first students of the Young Lamas Home School, established by His Holiness the Dalai Lama and Freda Bedi (1911-77), the first Western woman to be ordained as a monastic in Tibetan Buddhism. He later edited and printed many volumes of rare Tibetan manuscripts that might otherwise have been lost, and was also instrumental in establishing organizations that would share the teachings and play a key role in ensuring the survival of Tibetan Buddhism. Although he would elect to give up the monastic life, Rinpoche continued to spread the Dharma as a lay teacher, sharing his wisdom and knowledge of the Buddhist teachings with practitioners in the East and the West.

Gelek Rinpoche moved to the United States in 1980, and in 1988 founded Jewel Heart International, an educational and cultural non-profit organization, headquartered in Ann Arbor, Michigan, which is “dedicated to the preservation of Tibetan Buddhism and to bringing the practice of this rich tradition within the context of contemporary life to everyone.” The institute has since grown to include chapters and study groups across the US, as well as Malaysia and the Netherlands. The center’s more high-profile members have included Beat-poet Allen Ginsberg and composer Philip Glass.

Rinpoche’s writings include Good Life, Good Death: Tibetan Wisdom on Reincarnation (2001), and The Tara Box: Rituals for Protection and Healing From the Female Buddha, with contribution from Brenda Rosen (2004).

In a brief memorial notice, the Office of Tibet in Washington, DC, praised Gelek Rinpoche as one of its strongest sources of inspiration, observing: “Kyabje Gelek Rinpoche’s immense contribution to the preservation of authentic and seminal Tibetan Buddhist teachings for both present and future generations, as well as to the non-Tibetan followers is immeasurable. We remain forever grateful for his vast contribution to the world at large.”